This is Savage: Sharing our History

Who was George Coakley? 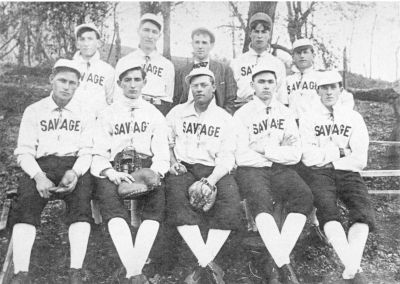 Photo caption: George Coakley, standing second from the right in the back row, was one of the "Savage Nine" back in 1910. Other team members were Tom Duffy, Tom Fahey, Mark McDonald, George Allen Sr., Ernie Sanderson, Andy Studer, Norman Rockstad, and Mike Zeller.

Long before the likes of Willie Mays, Mickey Mantle, and Ted Williams, George Coakley was hitting home runs, stealing bases, and fielding ground balls as one of the original Savage Nine. Born on April 24, 1892, Coakley started playing baseball for Savage, along with his brothers Fred and Ray, at the age of 13 and continued playing into his 50s. Each Sunday, Savage would play games against other clubs including Bloomington, Shakopee, and Prior Lake. In those days, teams competed against one another just for the fun of it. But this was by no means sandlot baseball! In fact, Coakley was given a tryout for a team in the Northern League, which was considered the top level of baseball in the state, the pro ranks. He was offered $60 a month to play in the “big leagues” but turned it down and stayed in Savage to work and play baseball once a week.If Coakley had been born 100 years later, who knows how much money he would have made as a pro baseball player! George Coakley represented something all of us can be thankful for – baseball, a game once played by men and boys (and some girls too!) for the sole purpose of fun!

If you are interested, you can explore more about Savage’s past at the Savage Public Library’s Heritage Room.