2019 Firefighter of the Year

John Meyer was named this year’s Firefighter of the Year by his fellow firefighters. John has an obvious love and commitment to the Savage Fire Department. "From the time he joined Savage Fire, John has shown himself to be dedicated, competent, and a leader amongst his peers,” praised Fire Chief Andrew Slama at the recent award ceremony. Around the station, Meyer is a role model for senior, junior, rookie and future firefighters. He is both eager to share his wealth of experience and training in EMS to help others become better and also challenges himself to be the best firefighter he can be, both physically and mentally. “When John shows up for a call, you know you are getting a well-trained, confident and willing firefighter,” stated his peers who nominated him for this award. “He works hard both in training and on the fire ground, and has made a huge impact on our department and his fellow fighters this year.” 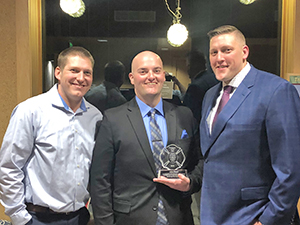 Thank you to following firefighters for their dedication and years of service to the citizens of Savage: